"Julio is a cool cat. I became aware of his work when I used one of his paintings as the poster image for an exhibition I was curating on the Southbank. It was the stand out piece of the exhibition. His work is vibrant, intelligent, relevant, and quirky. I love his work. Welcome to his world." 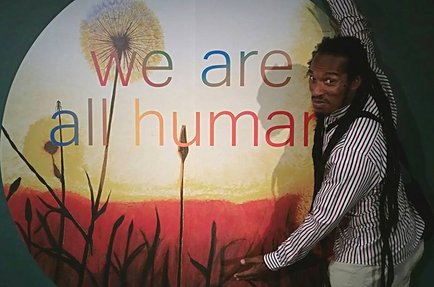 ART HELP JULIOCESARTIST PAINT HIS WAY OUT OF A CORNER

Being a finalist for the Newcomer category of the Global Arts Awards Dubai, last November for his mesmerising painting “Tree Of Life”, the last painting he produced in prison, and now listed as an artist in the International Auction house database, are the latest two achievements for Julio Cesar Osorio, an artist who discovered his talent at the lowest point of his life. His story emphasises the importance of art, the power it has to heal and transform people’s lives.

Before that his passion for documentary photography inspired him to return to education at the age of 27 and then pursue a career in the industry.

A visit to his place of birth, Colombia in the late 1990s, led to his first big project “Work, Play, and No Rest” which was part of a university assignment. This developed into a five-year project that produced a book of 150 photographs reflecting the lives of disadvantaged children in Third World countries Twenty per cent of the sales went to two orphanages, one in South Africa and Peru.  Several copies are now located in the British Library.

During the next two decades, Julio worked as a freelance photojournalist.  Always a self-starter, in 2009 he created JC’s Studio, located in London’s Soho district, where he began to build a thriving business and client base.  But in September 2012, Julio realised it would be two and a half years before he’d be able to walk through the front door of his apartment again, after receiving a prison sentence following an altercation with a nightclub doorman near his studio.

The first month he spent locked up for 23 hours a day, and he fell into a deep depression while awaiting trial.

One day he was allowed out of his cell to attend the induction day for education. It was in a small art room where he found the spark that changed his life.  There were basic materials available, paper, pencils, brushes and acrylic paints and he was instructed to paint or draw whatever he wanted and encouraged to look through the art books available for inspiration. He chose to copy a painting of a seaside view from a book. He describes how he started to paint and as if by magic his mind was transported to that seaside he was painting and he was struck by the feeling of escapism he experienced…

He became a compulsive, prolific painter from that day.

He asked his art tutor if it was possible to borrow a small easel to take back to his cell.  After permission was sought from the Governor, he resourcefully used small toiletry containers to smuggle the acrylic paint to his cell, fire blankets and an old set of stretcher bars he found to set up his studio. “This was the turning point,” he says. He very rapidly embraced his newfound passion and became obsessed with all the art literature available.

During this time, others took notice of his talent, which he considers to be a blend of surrealist and contemporary influences, coupled with vibrant colours, which he attributes to his childhood experience in Colombia. Recognising his potential, one of his tutors offered to present Julio’s work in a solo exhibition at the Barristers chambers in Chancery Lane, and here his first painting was sold.  The exhibition was subsequently featured in Not Shut Up, a charity and magazine, which celebrates and facilitates creative programming for those in prisons, secure hospitals, refugee centers, and children’s homes.

He produced 60 paintings during his incarceration. Each painting is tagged with a HM PRISON clothing tag that shows the origin of the work.

Since his release, his work has featured at London's renowned Southbank Centre as part of the Koestler Trust's 'Catching Dreams' and the following year his painting Miniscule Beauty was chosen as the main image for the exhibition “We Are All Human” curated by the poet, writer, lyricist and musician, Benjamin Zephaniah.

Julio received a fine art scholarship through The Monument Trust.  He has had several solo exhibitions in London as well as group ones.

As he continues to paint, the messages behind his work have evolved from nostalgic origins to more politically charged, evocative themes. 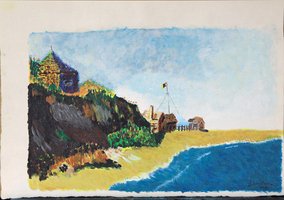 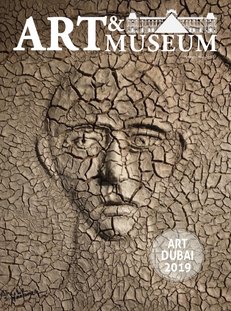 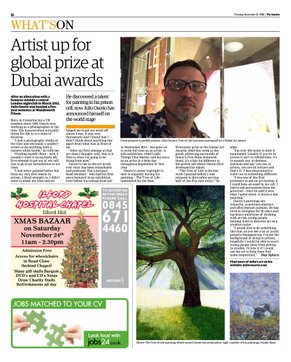 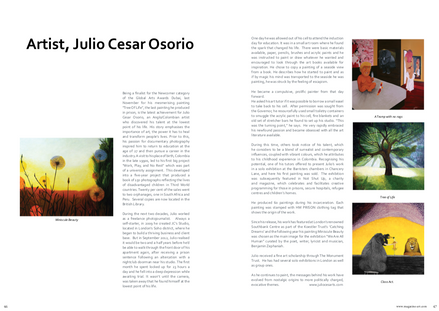 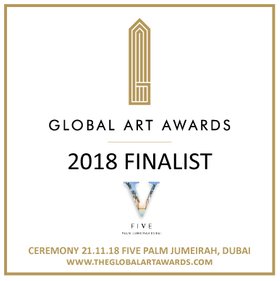